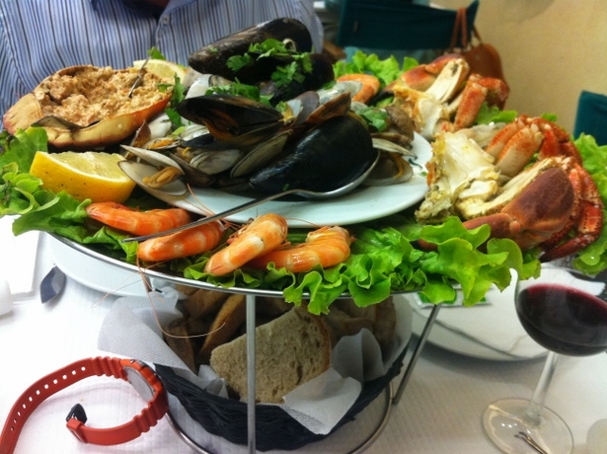 Portugal has some of the most delicious dishes in Europe, of course I'm biased being Portuguese, but we literally put on stones in weight after each and every visit.

Portugal has had so many different cultures pass through their land over time, which has influenced and has made a huge impact on the cuisine we see today.

As well as this, the Portuguese navigators also returned with many products from afar when they discovered the sea routes to new Continents.

Without a doubt, being situated by the Atlantic coast has been a major factor in making fish and seafood dishes become very popular. Portugal has the biggest consumption of fish in Europe, this may be due to the fact that it has over 300 recipes of its favourite fish, 'Bacalhau' salted cod. All types of fish are served every which way, from grilled sardines 'Sardinhas assadas' to grilled squid 'Lulas grelhadas' and many, many more. A fish stew called 'Caldeirada' is also a favourite, consisting of a variety of fish, potatoes, onions and tomatoes. However, you can't beat 'Caracois' periwinkles, served with tasty bread and a nice refreshing cold beer on a hot summer's day.

Although the Portuguese love their fish, let's not forget that they are also great meat eaters too! One of their favourite meat dishes is a meat stew (hotpot) known as 'Cozido a Portuguesa' which consists of lots of 'Chouricos' cured meat sausages, 'Morcela' black pudding, pork and beef, rice, potatoes and vegetables. Another popular dish is a fried pork stew with clams 'Carne de porco a Alentejana' as well as 'Cataplana', plus there's the delicious 'Bitoque' steak with a fried egg on top served with rice, chips and a typical Portuguese salad (tomatoes, lettuce, onions, seasoned with salt, olive oil and vinegar). The majority of Portuguese dishes are served with rice, chips and a side salad.

They also enjoy their piri piri chicken dish - 'Frango assado' immensely. Nando's maybe famous for it now but it certainly originated in Portugal first. Plus, for a snack or a light meal they very much love their delicious steak 'Prego' or pork 'Bifana' sandwiches.

In Portugal soups are very much savoured too. Vegetable soups can range from cabbage/potatoes/chourico 'Caldo Verde' soup and 'Feijao Verde' soup with carrots/potatoes/onions/green beans to chicken/rice soup 'Canja' and not forgetting meat and kidney/butter bean stew 'Feijoada' plus 'Acorda' the pauper's soup made with boiled eggs, stale bread, garlic and coriander leaves.

With the many olive trees grown throughout Portugal today, olive oil has become an essential ingredient, not only for cooking but for flavouring dishes and salads too. The Portuguese use many others herbs too such as parsley and lots and lots of garlic, to season plus add flavour.

Now, when it comes to desserts, Portugal has so many fabulicious desserts, it's hard to choose one from the other. My favourite is the chocolate mousse which most people are unaware of just how good it is. It's super rich in flavour, loaded with alchohol and chocolate. If you've got a sweet tooth, it's perfect as it's sweet, sweet, sweet. Of course my favourite cake is the best cake in the world, the 'Pastel de Nata' custard tart. Nothing else comes close for me! Amongst many others there's also the 'Bola de Berlim' custard cream donut - funnily these are actually sold on beaches during the hot summer months. The Portuguese dessert list is endless too, from 'Molotoff' meringue pudding, 'Arroz doce' rice pudding, to 'Leite Creme' caramel and custard and 'Pudim Flan' creme caramel.

Portugal also has an array of magnificent cheeses 'Queijos'. Cheese is not really used in any Portuguese dishes but rather to eat with bread and wine. Many are made from mountain goat's and sheep's milk. If you're a cheese lover you must try their soft cheese 'Requeijao' and cottage cheese 'Queijo fresco' in a sandwich - it's super delicious. In addition, their tasty breads are served with just about everything. 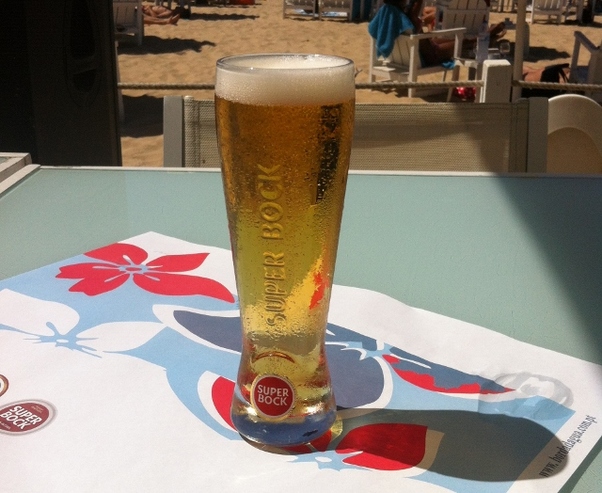 Refreshingly good beverages...
Portugal is mostly renowned for its tasty red and white wines but is predominantly recognised for its Port, a fortified wine from the Douro region and Porto.

Its 'Vinho Verde' is also popular with its locals but is becoming more recognised around the world through tourists who have tasted it, liked it and are now spreading the word. 'Vinho Verde' is a young wine (not green) produced in the Minho region.

Portugal also has a penchant for brandies and liqueurs especially their 'Licor Beirao', 'Aguardente' fire water and 'Ginjinha' - a little dash in a 'Bica' espresso works wonders - wakes you right up!

Portugal has super tasty beers too. 'Super Bock' and 'Sagres' are so refreshingly good in the summer months and are normally served with 'Tremocos' (lupin beans) - the strong salty flavour makes you thirsty for more beer... (I wonder why they serve them for free!?!)

Useful 'Eating Out' in Portugal tips & service expectations to be aware of:

1. It is common practice to be served bread, olives & other nibbles as soon as you're seated - these are never free & will automatically be added to your bill. You can just politely decline these if you don't fancy them & never feel embarrassed in doing so!

2. More importantly, always check your bill thoroughly - again, there's nothing wrong with doing this either! There's a tendency to have little extras slip in here & there which you shouldn't be paying for.

3. The customer is never right in Portugal - so good customer service can be somewhat lacking at times & you may be met with some arrogance.

Hope the above is useful & helps you have a pleasant & better dining experience in Portugal having had this info upfront.