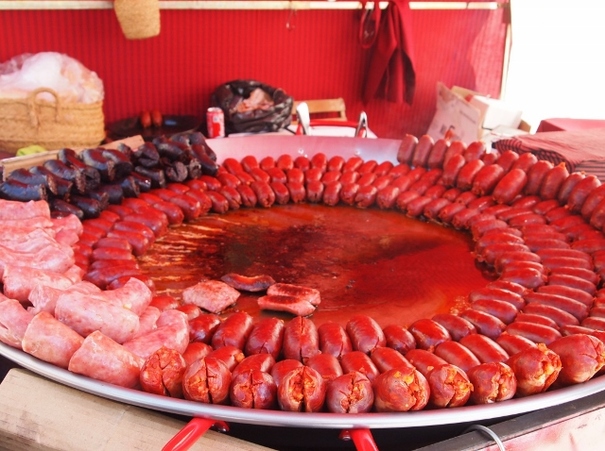 Spanish life is a full-on fiesta and this is definitely reflected in their 'Riquísimo' fusion of foods! So much so, they even have the 'La Tomatina' tomato festival (tomato fight!) which is held every year in Valencia.

Each Spanish region has its own wonderfully enriched and simple traditional gastronomy as the ingredients are grown locally from the vast land strewn across Spain.

The Spanish are famed for their explorations to the Americas during the 15th century, bringing tropical fruits and vegetables back from their travels, which they still use in their flavoursome dishes today - these ranged from peppers, potatoes, tomatoes and a few others.

Its culinary is one of the most richest in the world as it was influenced by many eclectic cultures crossing through Spanish territories over the centuries. With the help of Spain's hot and sunny climate, it's main product olive oil has been produced from as far back as 1200 BC.


During the 8th century spices as well as sugar cane were introduced to Spain by the Moors and a lot of its cuisine derives from then.

Today, Spain is the number one producer and exporter of olive oil, olives and honey. Many Spanish delicacies have spread across the globe and are now widely recognised, such as tapas (appetisers) - a social food consisting of small plates of seafood, meats, vegetables, fish and cheese dishes. There's also the paella (rice, seafood, meat and vegetables) served hot or cold and finally the tortilla (potato omelette).

The Spanish love to eat - not surprising as their meals are very savoury. They tend to eat lots but very slowly and spread their meals throughout the day as well as a bit of exercise in between. Like the majority of us, they have breakfast 'El Desayuno'. Some have their very tasty 'Churros' donuts dunked in really thick hot chocolate but some opt for a healthier option.

Their next meal usually consists of a few 'Tapas' but are eaten mid-morning before lunch. Lunch 'La Comida' is their main and largest meal of the day and several courses are served. Taking advantage of their 2-3 hour lunch breaks, they're able to not only enjoy multiple dishes but a lovely short nap 'Siesta' too. However, times are changing and this is now a rare activity in the main towns and cities. Lunch is normally finished off with an espresso coffee and a brandy.

Believe it or not, they have another snack late afternoon around 5pm known as 'La Merienda' which normally consists of bread with chocolate spread or with hams and chorizos. Dinner 'La Cena' is then served after 9pm and usually consists of fish/meats with potatoes/rice or an omelette with a side salad/vegetables, but much lighter than lunch. Sometimes, they have fruit or a light dessert to finish off.

The Spanish are also known for staying out until the early hours in the summer months and at weekends and are even accompanied by their young children. Yes! Can you believe it - that's unheard of back in the UK. So after dinner they do not stop and turn in, they carry on at their local cafes with drinks, coffees and cakes. It's a very social family affair.

Primarily bordered by the Atlantic ocean to the north and the Mediterranean sea to the south, Spain is able to offer plentiful variety of fish and seafood dishes. These include sardines, squid, tuna, clams, mussels, sea bass, sole as well as many others. Some are served in tapas where others are fried and served with bread and a side salad.

As well as using fish as an ingredient, they use meats in many dishes too. Their renowned paella dish (named after the pan 'paellera') consists of seafood as well as chorizo and chicken plus many other tasty ingredients.

Spain has many meat dishes too including lamb, poultry, pork and beef as main ingredients which they use in a variety of stews and rice dishes. Their wonderfully traditional Serrano/Iberico cured ham and Chorizo (pork sausage) are very popular with the locals too and are now starting to be recognised around the world. They also enjoy eating roast suckling pig and wild boar too.

As accompaniments they enjoy tomatoes, spinach, lettuce, cucumbers, mushrooms, asparagus and a variety of beans and lentils. Plus they like to use lots of onions
and garlic in their dishes as well as in side salads. As well as using many herbs including paprika, cumin and saffron to season their dishes they like to add a variety of nuts to enrich many dishes too such as almonds and pine nuts.

Another well known Spanish dish is the 'Cocido' meat and vegetable stew which includes vegetables, beans, meats and chicken. They like to include beans and
lentils in many of their soups. Not forgetting, the renowned 'Gazpacho' chilled vegetable soup.

The Spanish adore their breads and these our enjoyed as an accompaniment with all their meals, either dipping it in olive oil, eaten with cheese or used in stews and soups. Their favourite cheese is Manchego, a sheep's milk cheese which they use in tapas or just a snack with bread.

Spain's irresistible desserts and sweets are a real treat too, such as the almond tart, cookies and turron (nougat). Many of their desserts are made from cream or fresh milk and their 'Natillas' custard is super delicious. Creme brulee and Flan are also tempting favourites. But the most well known and flavoursome sweet is the 'Churros' (donuts) dunked in very thick chocolate - yummy!

Spain is a big exporter of oranges, tangerines, mandarins and clementines, allowing them to consume plenty of fresh fruit with their meals.

Spain has some awesome wines which is not a surprise with the huge amount of acres covered with wonderful vineyards (over 2 million).

This allows Spain to export its wines worldwide, making it the world's third largest producer, the UK being its highest importer.

Its main wines are Rioja and Cava (sparkling wine). Spain also produces sherry (fortified wine) in the Jerez region as well as brandy and cider (Sidra).

You will no doubt recognise their tasty beers, San Miguel, Mahou, Alhambra, Estrella and Cruzcampo.

But their most famous drink is probably their luscious Sangria, wine and fruit punch.